While working from home on Sunday evening, I was listening to 60 minutes in the background.  The news program caught my attention as as the focus shifted to Ukrain and a segment entitled, “The heart of the revolution.”  The reporters suggested that a “team mentality” had developed in Independence Square, contributing to the success of the revolution to date.  I was intrigued. 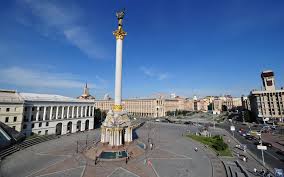 Above, a beautiful image of Independence Square, the center square of Kiev, as well as the capital of Ukraine.

Today, the center of the city looks quite different.  It’s home to thousands of insurgents sustaining a revolution agains Ukriane’s government. 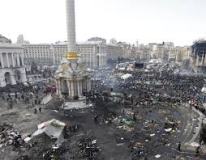 The news segment noted the informal leadership that has been instrumental in maintaining the efforts to over through the government.  As the segment progressed, I noted the social capital that has developed among those who have been living – quite literally – in the square for months.  Some members of the community serve food, others pick up debris, serve to protect the camp, or prepare provisions such as firewood.  Each member of this community seem to be serving because they believe in the cause, and each other.  The cohesion of the make-shift community has, no doubt, contributed to the success of the movement.

Social capital can be defined broadly as the expected collective or economic benefits derived from the preferential treatment and cooperation between individuals and groups.  According to Robert Putnam, in Bowling Alone, social capital refers to the “collective value of all ‘social networks’ and the inclinations that arise from these networks to do things for each other.”  Putnam indicates that social capital works through multiple channels:

In this case, bonding social capital, that is social capital within a homogenous group, serves as the foundation for the sustained revolution.

It remains to be seen how one of Ukriane’s oligarchs and the country’s ninth richest man, Petro Poroshenko, will influence the next phases of the revolution.  Forbes notes that Poroshenko’s net worth is approximately $1.3 Billion and leads presidential election polls in Ukriane according to the KyivPost.  In response to a 60 Minutes reporter asking how much time he spent in the square recently he comments, “Almost all of the time.  If you want the people to be with you, you must be together with the people.”  Proshenko explained that the revolution is about values and justice – two factors that contribute to the strength of the social capital that has developed in Kiev.  Proshenko values the network and uprising that has brought Urkaine to this state; he must now wait to determine the country’s next steps while continuing to support the network that has sustained the revolution to date.

Now, what?  We wait.  We wait along Proshenko and pray for peace.  We’ll watch with great anticipation as East Ukraine and Russia negotiate.  We’ll watch as the social capital that has developed and bonded insurgents is put to use during this trying time.  We’ll wait to see if the cohesion that has sustained efforts to overthrow the government is maintained as the deep division of a country aims to shift the history of the region forever.  We wait… and pray.